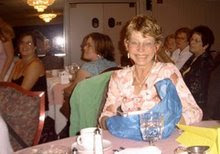 Hi Everyone,
I hope you are all doing well, I am doing good. I have some things to catch up on on my blog, but today I need to post about my son in law Dana's mother Wendy. Today is her first anniversary of her passing at the young age of 52. She had battled Cancer from the age of 47. She had bladder and liver cancer so they did a Whipple surgery on her insides. Most people do not live past 30 days after that surgery. She lived for 5 years after that which was a miracle in itself. She is in a medical book Christa told me. She was the sweetest person, she always smiled even when she was suffering. She was so good to my daughter. Dana and her were very close and Dana wanted to bring home a girl to Marry that she would be proud of. She was not only proud of my daughter Christa, she loved her so much. As they approached their Minister for their wedding vowes, she was standing there smiling and said, I love you Christa. As a mother it is hard to see your baby join another family, but she made me feel such comfort with her love towards my daughter that it made it easier. After 9 months of marriage we found out we were going to have a grandchild from our kids. We were so excited. We knew how beautiful of a child they would have between the two of them. Most of all though we wished for a healthy grandchild. During the pregnancy Wendy found out her cancer had come back. It was in her lungs. She held on for months and was due to pass away in October. Christa asked her doctor if she could be induced a couple of days early so she could meet her granddaughter. We knew it was a girl. The doctor said he would and Christa went into the hospital on October 1st. She had Briana on October 3rd. I bought an angel stone and put it in Wendy's hand on October 1st as well. I told her I would give that to Briana some day and when she needed help, she could hold on to that stone and you would be there for her. Wendy loved Angels, she had them all around her house. So I know she is an Angel looking over Briana. When we called the house to let Wendy know she was born on the 3rd of October, as close to death as she was, she wanted to come to the hospital to see her granddaughter. She was in no shape to do that. So Christa left after 24 hours and went straight to Wendy's house. They laid Briana next to Wendy and she looked at the both of them and said "Good Job". They laid next to each other for 24 hours and then she really slipped away. I will never forget her spirit. Briana inherited her hair which is so lovely. She is an inspiration to me now to be able hold on in the depths of her pain to see her son's first child. On days when I think things are tough, I will think of you Wendy and your happy spirit and smile. I will make sure Briana will know that as well.
Thanks for visitng my blog,
Take Care,
Janet :)
Posted by Janet Gardner at 9:17 PM