View Of The News Edited

Hi there, I must say somedays the news can just be to close to home, funny and downright wrong! I feel so bad for this poor women who was forced to remove her adult diaper for TSA agents. For some reason I could not help but picture my mother, who was in a wheelchair at the end of her life, in that situation. She would have said, you want my adult diaper, I'll give you my adult diaper, smack right up side the head LOL! Nobody put her in the corner (you know like baby!) She was a spitfire :) Then I couldn't believe they gave air time to these two guys who were so drunk they 1)fell off an escalator after a concert, and 2)got arrested for a 4th drunk driving while driving a golf cart. Hey maybe I could drive around in a go cart or a golf cart, don't think you need a license for those! By the end of the news cast I was laughing my ass off. Not that the TSA story was funny at all, no way, no how. But between picturing my mom putting those TSA agents in their place and watching what was just being praised as the city of Champions last week suddenly turn into a city of drunkenness and mobster's (Whitey Bulger), I had to laugh, Ya that's the Boston I know. Watching the news has become a source of entertainment for me, who knew that would ever happen! Can't wait to tune in tonight to see what comes up next LOL!
Thanks for visiting,
Janet :)

A drunken teen riding the railing fell off the top
of an escalator at the Alewife T station in Boston Ma
on June 26, 2011. 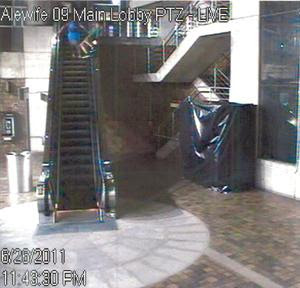 Laconia police said they arrested a man last week
on his fourth DWI charge while he was riding a go-kart.

Email ThisBlogThis!Share to TwitterShare to FacebookShare to Pinterest
Labels: News or Entertainment