Hello, I hope your all doing well. I am doing pretty good considering it was a tough week. I had to say goodbye to my brother in law who passed away last Saturday unexpectedly. He was more like a brother who was in my life for 39 yrs. It was not his heart as we thought, but instead they believe it was a blood clot that went to his lung, which can occur after a major surgery like he had on his heart. Between having lost loved ones throughout my life and my religious upbringing I can't help but believe in an afterlife. Believing also gives me a way to hold onto them, gives me comfort knowing they still exist somewhere, and a sense of peace thinking that I will see them again. With my belief in the afterlife, I also believe in Mediums. Then last night when I watched Inside Edition I was a little sad to see them questioning whether or not Theresa Caputo is real or a fake. I love her show and my own personal belief is that she if for real. Even if she get's it wrong sometimes, for the most part she say's things that just blow people's minds, how could she have known such details of a strangers life?? I had a medium reading once in my life, and I swear it was my Father who came through, the woman said things to me that she could not have known about me and my Father. So I'm curious as to what you think? If you believe in the afterlife, do you also believe in Mediums? or do you think they are fakes and taking advantage of the vulnerable? Let me know, I won't be offended or hurt by your comment if you do not agree with me, I like to be open minded about any issue and possibly learn something from your perspective.
I hope all of you have a great weekend,
Thanks for visiting,
Janet :) 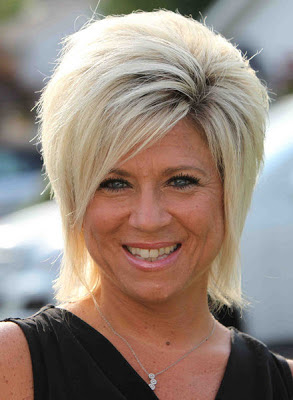 From Inside Edition
She's one of the most popular reality stars on TV today. For three seasons now, Theresa Caputo, the Long Island Medium, has amazed viewers and brought people to tears by communicating messages from beyond.

So is the Long Island Medium really communicating with those who have passed on, or is she simply using trickery to fool the living? INSIDE EDITION decided to see what happens at her popular live readings across the country. What we saw was starkly different from what viewers see on her TV show.

On TV, she's almost always dead right, but at her live shows, we watched her strike out time and again.

"Is your mom departed?" she asked another fan. The woman responded, "My mom? No, she's still with us."

Edward believes one technique Theresa Caputo uses is a classic trick called "cold reading." It’s done by firing-off open-ended questions that someone in a large audience will surely relate to, like a number.

The Long Island medium, Theresa Caputo sent us a statement saying... "I respect and understand skeptics. I'm not trying to prove anything to anyone, that's not why I do what I do. I feel, and have been told by my clients, that my gift has really helped them, and that's all that matters to me."

Funny spoof on her though lol!

Posted by Janet Gardner at 4:55 PM

Email ThisBlogThis!Share to TwitterShare to FacebookShare to Pinterest
Labels: For Real, life after death, Long Island Medium, Talking to the dead, Theresa Caputo