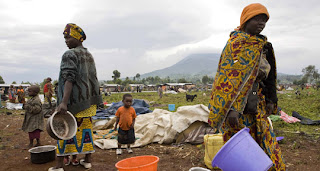 Hi Everyone,
I chose to share this article about the refugee crisis because it focuses on the desperate state that these poor children and their mothers are living in. If you can take the time to donate to the Red Cross or help in any way it would be a blessing for these people in their most desperate hour. I have added the links to where you can help, even if you visit the women's commission you can help by contacting your Elected Official concerning many issues they face. You can see what issues and legislation needs immediate attention at The Take Action section of their website. Thanks for visiting my blog and helping in any way you can.
Take Care,
Janet )
http://www.womenscommission.org/
http://unite.blogcatalog.com/participate/
http://www.redcross.org.uk/TLC.asp?id=81617
Congo Crisis Hits Children The Hardest
Food Aid Still Not Getting Through As Thousands Of Childrens'
Lives Hang In The Balance At Packed Refugee Camps
Harry Smith reports (CBS/AP).
They wail and yell to show their distress: the youngest victims of eastern Congo's latest eruption of violence have no other way to say they're famished, sick and weary. Thousands spent the night in the open, their mothers trying vainly to shield them from the chilly rain with cotton cloth or plastic sheets torn from sacks. Many are so weak and malnourished they have no protection against disease. The U.N. humanitarian agency said Sunday that the violence has forced 250,000 people from their homes since rebels began their offensive in late August, swelling a refugee population that already stood at 1 million. More than 60 percent of the refugees are children, according to UNICEF. Aid groups say that children are being disproportionately hit by a crisis that could expand into a full-blown humanitarian disaster if assistance is not widely distributed soon. Click here to learn more about the groups and the history behind the crisis in eastern Congo. "We're all so hungry. And today it doesn't look like we'll get any food again," said 13-year-old Louise Maombi, who was comforting her sick 3-year-old brother outside a free clinic in a camp nearly four north of the provincial capital of Goma. Twishime was sweating, running a high fever and crying that his body ached - typical signs of malaria. Jaya Murthy, the spokesman in Goma for UNICEF, said emergency food, medication and tablets to chlorinate water had arrived from Rwanda on Saturday and would soon be distributed at the Kibati camp. With many aid workers having fled eastern Congo, the U.N. humanitarian agency said it would be Tuesday before food would arrive at Kibati, where the population has swelled from 15,000 to 50,000. The first humanitarian convoy to go behind rebels lines since eastern Congo erupted in violence in August carried medical supplies Monday for clinics looted by retreating government troops, but no food. The head of the U.N. Office for the Coordination of Humanitarian Affairs in eastern Congo said U.N. peacekeepers were escorting the convoy. Both the Congolese army and the rebel leader assured the convoy safe passage. If there is no immediate help many could die. Jaya Murthy, UNICEF, GomaEven before the latest crisis, children at Kibati were reaching the "emergency threshold" where 10 percent are "skin and bones and the last stage before they perish," Murthy said. "We know the children are famished," he said. "We don't normally feel the type of desperation" displayed this week at Kibati. The situation in eastern Congo "could have catastrophic consequences for hundreds of thousands of children who are weak, hungry and vulnerable to killer diseases," he said. "If there is no immediate help many could die." Nurse Justin Majuwa of the Los Angeles-based International Medical Corps said the worst problems at Kibati's clinic were malaria and acute diarrhea, diseases that can kill a weak baby in two or three days. In the last couple of days, tens of thousands have headed north behind rebel lines, saying they had no choice but to get home because they could find no shelter or food. On Saturday, a disconsolate woman wept on the roadside north of Kibati: She had fled the violence into neighboring Uganda and was making her way back through the forest when she lost her only son. "What shall I do? What will become of me?" she wailed, tearing at the braids on her head. "I can't go home without him and I can't find him." She was too distraught to give her name.
Posted by Janet Gardner at 11:53 AM