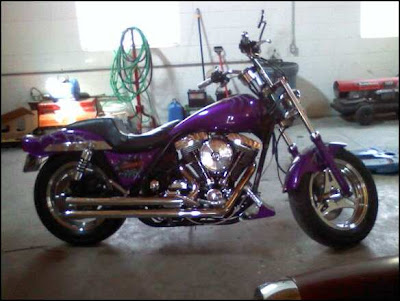 Hi Everyone,
I hope you are all having a good weekend, I am enjoying mine. My best friend
and neighbor for many years use to call my hubby Pete, stud muffin because
when she first met him, she could not get over how handsome he was , not to
brag!, we had many laughs over that for many years, but sadly she got
pancreatic cancer and left us too soon at the age of 59, three years ago,
I miss her so much. I never had a best friend like her. Anyway she would
be loving the fact right now that Pete bought himself a Harley Davidson,
she would come up with many jokes about it and want to be the first one
on it to take a ride with him lol!!! Pete's nephew was selling it and he got
it for less than it is worth. I am not worried about him riding because he
is very responsible and is the type if he has one drink he will not drive.
His brother owns one as well so on Sundays he will go ride with him. He
is going to take bike lessons and is going to take Scott along with him to
learn. Scott is a clean cut kid, so we can trust him and this year every time
I picked him up at high school when he saw a motorcycle he just stared,
I told him he can only ride the back roads if he passed the course. He is
going to get his driving permit on August 31st. OMG where does the time
go!! The only thing wondering around in my mind is, does that mean
as his wife and if we go riding do I now become a biker chick, and should
I head out and buy some cool leather clothing???? I told Christa we were
going to buy a sidecar for Briana and some leather clothing for her to cruise
around with us. Even though I was kidding and eventually I told her so,
her reaction was what I thought it would be and I had a good laugh!!
Thanks for visiting my blog,
Take Care,
Janet :)
Posted by Janet Gardner at 10:15 PM