Hello, In honor of a Beantown Comedian who made it big, Louis CK, who will be hosting Saturday Night Live this weekend, I thought I would share some of his comedy with you. Some say his comedy is dark, but I think it's brilliant. He is just simply putting his spin on life, and if it is dark sometimes, then so be it, at least he makes it funny. I hope you get a laugh or two from this post, and enjoy your weekend!
Thanks for visiting,
Janet :) 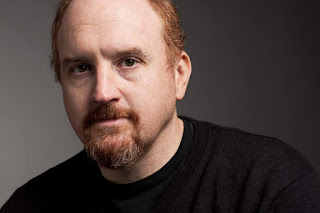 "Whenever you leave behind failure that means you're doing better. If you think everything you've done has been great, you're probably dumb"

"We live in an amazing, amazing world, and it's wasted on the crappiest generation of spoiled idiots"

In case you would prefer to read instead of watching

LOUIS C.K.: Those were simpler times I think, I just feel like - we may be going back to that by the way, but uh. In a way good, because when I read things like “the foundations of Capitalism are shattering” I’m like ‘maybe we need that.’ Maybe we need some time where we’re walking around with a donkey with pots clinking on the sides

CONAN: You think that would just bring us back to reality?

LOUIS C.K.: Yea, because everything is amazing right now and nobody’s happy. Like, in my lifetime the changes in the world have been incredible. When I was a kid we had a rotary phone. We had a phone that you had to stand next to, and you had to dial it. Do you know how primitive – you’re making sparks – in a phone. And you actually would hate people with zeros in their numbers because it was more – you’d be like “uh this guy has two zeros in his number, screw that guy, why would I want to-uh!” And then if they called and you weren’t home the phone would just ring lonely by itself. And then if you wanted money you had to go in the bank, when it was open for like three hours. You had to stand in line and write yourself a check like an idiot. And then when you ran out of money you’d just go ‘well, I can’t do any more things now. I can’t do any more things.’ And even if you had a credit card the guy would go “uh” and he’d bring out this whole “shunk-shunk.” and he’d write, and he’d have to call the President to see if you had any money…

CONAN: Yes, it’s all true kids, you had to call the President yea. It was ridiculous. Do you feel that we now in the 21st Century we take technology for granted?

LOUIS C.K.: Well yea ‘cause now we live in an amazing, amazing world and it’s wasted on the crappiest generation of just spoiled idiots that don’t care, because this is what people are like now – they’ve got their phone and they’re like “uh! It won’t…” Give it a second! Give - it’s going to space! Can you give it a second to get back from space!?I was on an airplane and there was high-speed internet on the airplane – that’s the newest thing that I know exists. And I’m sitting on the plane and they go “open up your laptop, you can go on the internet.” And it’s fast and I’m watching YouTube clips – it’s amaz – I’m in an airplane!” And then it breaks down, and they apologize the internet’s not working. The guy next to me goes “phff - this is bulls%$^!” Like how quickly the world owes him something he knew existed ten seconds ago

Flying is the worst one because people come back from flights and they tell you your story and it’s like a horror story – they act like their flight was like a cattle car in the forties in Germany – that’s how bad they make it sound. They’re like “it was the worst day of my life. First of all, we didn’t board for twenty minutes, and then we get on the plane and they made us sit there on the runway for forty minutes we had to sit there.” Oh really what happened next? Did you fly through the air incredibly, like a bird? Did you partake in the miracle of human flight you non-contributing zero?! You’re flying! It’s amazing! Everybody on every plane should just constantly be going “oh my God! Wow!” You’re flying! You’re sitting in a chair, in the sky!

Here’s the thing – people like they say there’s “delays” on flights. “Delays” really? New York to California in five hours - that used to take thirty years to do that!