Hello, Today an unimaginable tragedy occurred here in New England. I sit here tonight as a Mother, Grandmother, feeling devastated for all the victims. I'm sure many of you are feeling the same. I know Mental Illness, because I grew up with a Mother who suffered for years with psychotic episodes, sometimes violent episodes as well. So on days like this, when I'm reminded that someone is capable of killing children in their psychotic state, an issue that I was not aware of when I was younger, I Thank God even more so, that my siblings and I survived her episodes. I'm just coming to terms with what could have been at those times in mine and my siblings life. I know that because of my personal experiences, that I truly feel empathy for the ones who survived. I know their lives will never be the same, they will never be the same, but I have also learned that with the right support and therapy they can go on to live a healthy life. If you care to send a letter or card of support to the victims I included the address below, but most of all I ask that if you pray, pray that they do find the strength to begin their healing.
Thanks for visiting,
Janet 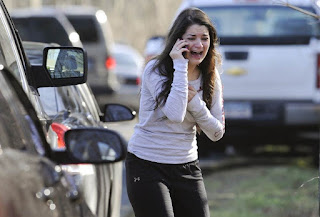 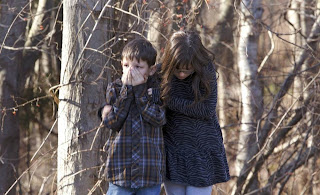 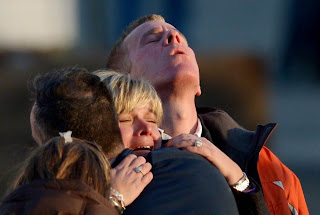 The gunman, identified as Adam Lanza, 20, was found dead in the school.

Lt. Paul Vance said 18 children died in the school and two more died later in a hospital. Six adults were also slain, bringing the total to 26.

In addition to the casualties at the school, Lanza's mother Nancy Lanza was killed in her home, federal and state sources told ABC News.

According to sources, Lanza shot his mother in the face, then left his house armed with at least two semi automatic handguns, a Glock and a Sig Sauer, and a semi automatic rifle. He was also wearing a bullet proof vest.

Lanza drove to Sandy Hook Elementary School and continued his rampage, killing 26 people, authorities said. He was found dead at the school. It appears that he died from what is believed to be a self inflicted gunshot wound. The rifle was found in his car.


First grade teacher Kaitlin Roig, 29, locked her 14 students in a class bathroom and listened to "tons of shooting" until police came to help.

"It was horrific," Roig said. "I thought we were going to die."

She said that the terrified kids were saying, "I just want Christmas…I don't want to die. I just want to have Christmas"

A Prayer To The Holy Innocents

Holy Innocents, you died before you were old enough to know what life means, pray for all children who die young that God may gather them into His loving arms.

Holy Innocents, you were killed because one man was filled with hatred, pray for those who hate that God may touch their hearts and fill them with love.

Holy Innocents, you experienced a violent death, pray for all who are affected by violence that they may find peace and love.

Holy Innocents, your parents grieved for you with deep and lasting sorrow, pray for all parents who have lost young children that God may wrap a warm blanket of comfort around them.

Holy Innocents, those around you certainly felt helpless to prevent your deaths, pray for all who feel helpless in their circumstances that they may cling to God for courage and hope.

Holy Innocents, you who are now in Heaven, pray for all of us that one day we may join you there to bask in God's love forever.
Amen