Hi Everyone, I hope your doing well. I was watching T.V. tonight when I heard about Kim Kardashian's upcoming nuptials, which is expected to cost about $20 MILLION DOLLARS! I of course know of her, like all of you, but I have never watched her show's with her family because I could care less about celebrity lives. After what I heard tonight I am disgusted by the fact that she is, along with all the sponsors, wasting so much money on one day! So I decided to look up what she was all about anyway? What is the big deal about her getting married? Here is what I found out: 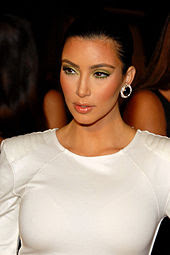 According to Wikipedia Kim Kardashian (born October 21, 1980) is an American socialite, television personality, model, and actress. Daughter of Robert Kardashian who defended O.J.!! Sure ok, but I still don't why she get's so much publicity. Then I checked out Yahoo answers. The most popular answer to my question is "cause she was best friends with Paris Hilton for a while, but what really got it going for her was the famous sex tape she made with Ray J." Oh, I thought to myself, I get it now, she is famous for nothing! No talent on her part. I mean really, anyone can make a sex tape LOL! (Well, then again, maybe some people shouldn't!) Her Daddy was famous for helping get a double murderer off, and then Paris Hilton decided that was a good enough reason to let her be her friend. Wow, and people feed into this sham of a "reality" person by buying her clothes and perfume and watching all her shows, how sick is that! Society has really got to stop enabling theses losers to live like Kings and Queens for no good reason. She has not earned this, if she did I would be happy for her. This material marriage is going to be a two hour special on E! as well, I can only hope she trips walking up the isle, now that would be entertainment for me! That may sound mean, but hey, it's how I really feel. I hope they do have a moment of thoughtfulness for the less fortunate and send some of the leftover 200,000 dollar cake to the kids in Somali.
Thanks for visiting,
Janet
Posted by Janet Gardner at 12:17 AM

Email ThisBlogThis!Share to TwitterShare to FacebookShare to Pinterest
Labels: famous for nothing, Kim Kardashian, reality star